Discover our other sites

Agriprotein Saving our seas, one factory at a time

The Need - a huge volume of organic waste is generated each year which is expensive to dispose of and leads to harmful methane emissions. At the same time there is a growing demand for high quality protein in the animal feed and aquaculture sectors. Currently this feed is produced in a way that depends on finite resources, and leads to environmental degradation.

The Solution - by using the remarkable nutrient-recycling capacity of the black soldier fly larvae, organic waste can be converted into high quality protein in a very short time period.

What makes it particularly smart - the residual material from the conversion process is a high quality compost that can be used to regenerate soils.

Flaws in our food system

Our current food production system is highly wasteful, damages the environment and does not produce healthy outcomes. In the near future, this situation will be severely exacerbated by the 2.5 billion new mouths to feed, which will require a 70% increase in global food production by 2050. To illustrate the size of the challenge: it has been estimated that more food will be needed in the next 50 years, than in the previous 10,000.

Our food system is wasteful in two principal ways. The amount of organic waste produced in our cities is about 650 million tonnes per year, a figure that is expected to double by 2025. In developed economies most of this volume is post-consumer ‘waste’; in less developed countries the greatest proportion is post-harvest, transport and storage ‘losses’.  Disposing of these large waste volumes are financially costly. Disposal costs in 2010 were estimated as US 94 billion and the value of food itself is about US 1trillion per year.

The other way that our food production system is wasteful, relates to the inefficient way we produce our meat protein. The metric for this inefficiency is the feed conversion ratio (FCR), referring to the amount of feed required to produce every kilo of meat; they range from about 1.6 for poultry, up to 6 - 7 for cattle. These very poor FCRs mean that even though livestock crop cultivation occupies over one third of our arable land, this huge area only produces about 1.2% of our protein.

The combination of a high volume of food waste and inefficient production has a significant impact on the natural world. Much of the land used to grow animal feed in Brazil used to be high biodiversity, carbon-sequestering rain forest. Similarly, to provide feed for the aquaculture industry, millions of tonnes of fish species are removed from the base of marine food chains, putting risks on higher chain species like cod and tuna.

Agriprotein, a company from South Africa, has developed a way of addressing food waste and providing sustainable animal feed by harnessing the metabolism of more than eight billion winged helpers.

Just as the circular economy is inspired by natural systems, Agriprotein’s waste conversion process has also been tested and perfected by nature. For over a hundred million years fly species have been breaking down waste material, whilst providing food for fish, birds and animals higher up the food chain. This is the essence of Agriprotein’s business - black soldier flies (hermetia illucens) are used to transform discarded organic matter to high quality protein feed for the fish, poultry and other industries.

The process, illustrated on the infographic below, starts when organic food waste is collected and transported to the Agriprotein facility. The waste is processed, removing recyclable or non-organic materials and then crushed into a paste. Black soldier flies are brought together in climate-optimised cages to mate. This leads to each female laying about 500 eggs which hatch out after about five days. The resultant larvae are then scattered over the organic waste (nicknamed ‘larvae lunch’), increasing their weight by about 200 times in ten days and converting the organic nutrients into protein. The larvae are then dried and milled to remove fat, creating a 55% protein natural organic animal feed product called MagMeal. The fat can be converted into an oil (called MagOil) providing an omega-rich health supplement for animals or used as biofuel. By now, the remaining organic material has been transformed into a nutrient rich compost which can be returned to farms to regenerate soils. 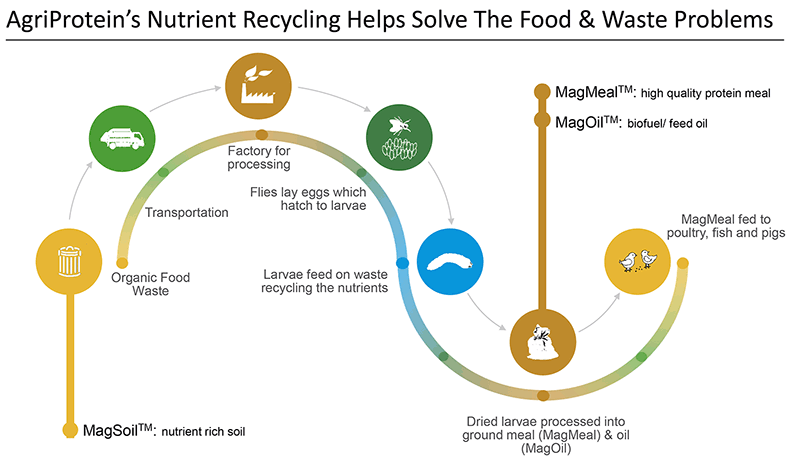 The benefits of the Agriprotein process are evident on many levels - from financial rewards and climate change mitigation, to protecting dwindling fish stocks in our oceans.

The current price of fishmeal is about US1,600 per tonne, so each Agriprotein factory potentially generates over US 7 million per year, with additional revenue from sales of oil and compost. The financial benefits are higher if you include the avoidance of costs associated with the disposal of organic matter.

The carbon impact of switching from fish meal, the predominant source of feed in the aquaculture industry, to insect meal is estimated as much as an 80% reduction. A strong contributor to this is the localised nature of insect meal production that uses feedstock from nearby sources, compared to the thousands of kilometres between remote fishing grounds and the eventual points of use in fish farms in the US, Europe and Asia. The environmental cost saving has been estimated as  US 2000/tonne.

However, the greatest impact could be in helping preserve wild fish stocks. According to the WWF, two-thirds of the world’s fish stocks are either fished to their limits or overfished. What’s more, fish used to produce fishmeal are mainly from lower food chain species, removing them reduces the food supply for larger species such as cod and tuna. Providing an insect meal alternative can help mitigate this - at full capacity one Agriprotein factory can replace the need for 15 million wild fish.

Scaling up this technology, Agriprotein plan to build 200 by 2027, is maybe just what is needed to give our precious oceans a well needed opportunity to regenerate.

Opportunities in the urban bio-cycle economy

We have detected that you are using an older browser. Please update to the latest version of Google Chrome, Mozilla Firefox or Microsoft Edge to improve your user experience.

If you are unable to upgrade your browser, please see our Technical FAQ page to get tips on how to improve your user experience.